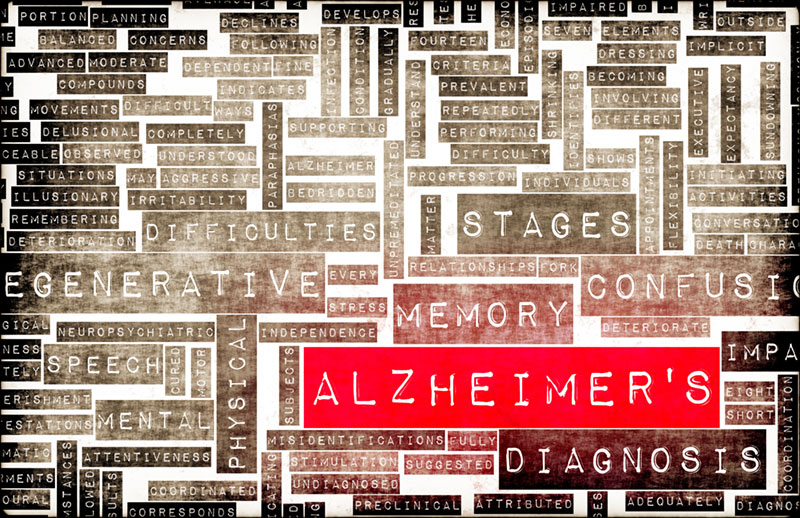 Alzheimer’s disease the most common of neurological conditions, affects over 5 million people worldwide. It causes patients to lose their memories and it debilitates them to the point where they need round the clock care.

The disease is the only one of the top five causes of death it has no known cure.

Scientists believe that Alzheimer’s is caused by a combination of genetic, lifestyle and environmental factors that affect the brain over time.

Below are the component’s that scientists are looking at when searching for a cure:
– reducing and eliminating beta-amyloid plaques in the brain
– regenerating of neurons
– repairing damage caused by the disease
– improving the mental functions of patients with Alzheimer’s disease.

Will You Develop Alzheimer’s Disease?

Your chances of developing Alzheimer’s disease increase with age, but experts agree that Alzheimer’s is not part of normal aging.

Less than 5 percent of the time, Alzheimer’s is caused by specific genetic changes that virtually guarantee a person will develop the disease.

Much of the Alzheimer’s research is now focused on amyloid and tau proteins. The build up and damage caused by these two proteins are a marker of patients with this disease.  Besides Amyloid and Tau proteins other factors that might also play a role are:

In the last few years, research has shown that the creation  of toxic proteins in the brains, called beta-amyloid and tau, can lead to Alzheimer’s disease. What’s less clear is what causes these proteins to accumulate.

In Alzheimer’s, threads of tau protein twist into abnormal tangles inside brain cells, leading to failure of the transport system. This failure is also strongly implicated in the decline and death of brain cells.

What is amyloid protein?

Amyloid is a protein normally found in the body. In Alzheimer’s disease, the amyloid protein is processed incorrectly creating a substance called beta-amyloid. This newly created substance is toxic to brain cells. In a healthy brain, these proteins would be broken down, but in an Alzheimer’s patient, these fragments accumulate to form plaques which eventually lead to the death of neurons.

What are tau tangles?

Along with amyloid plaques, neurofibrillary tangles, which are made up of Tau protein, are another sign of Alzheimer’s disease. In a healthy brain, tau forms part of a structure called a microtubule, which helps transport nutrients and other important substances from one part of the nerve cell to another. In Alzheimer’s disease, the tau protein is abnormal and the microtubule structures collapse, which leads to the death of brain cells. 11

In the current study, the scientists discovered that, in a mouse model of Alzheimer’s disease, the accumulation of tau in neurons disrupts the cells’ ability to strengthen their connections with other neurons, preventing them from stabilizing new memories.

amyloid and tau malformations are more likely as we age, and certain genetic mutations have been linked to their deformation in a percentage of patients. But what causes these proteins to malfunction continues to remain a mystery.

My goal is to prevent Alzheimer’s by targeting the causes currently believed to cause the disease using supplements, diet and exercise.

The Ayurvedic plant, Ashwagandha, has a powerful antioxidant component.

Extracts from Ashwagandha’s fruit and root protect brain cells in culture from the oxidant effects of amyloid beta; in one study they negated the cell death caused by amyloid beta.1

Laboratory findings reveal that ashwagandha extract inhibits acetylcholinesterase, an enzyme responsible for breaking down acetylcholine, one of the brain’s key chemical messengers.3 Drugs such as Aricept®, which is currently used in the treatment of Alzheimer’s disease, act in this very manner to slow the progression of this mind-robbing disease as well as improve cognition and behavior.4

Aspirin
Asprin reduces inflammation in the body, and it also reduces the number of activated platelets which is a problem in people with Alzheimer’s. Aspirin appears to promote conversion of DHA into anti-inflammatory molecules that may help to blunt the effects of inflammation on development of Alzheimer’s disease.5

Curcumin
Curcumin is derived from the Turmeric spice. It is an antioxidant that protects brain cells and their mitochondria against amyloid toxicity, and it inhibits the formation of abnormal proteins. 6,7

Low magnesium levels are lower in Alzheimer’s patients, and the degree of the magnesium deficiency is in direct proportion to the severity of the disease.11

Lipoic acid protects brain cells from death induced by amyloid beta, in addition , it binds to toxic metals. 12 43 Lipoic acid boosts production of acetylcholine in the brain, making more of the neurotransmitter available. In animal studies, alpha-lipoic acid slows down cognitive breakdown and loss of memory at a dose of 600mg/day. 13

CoQ10 and PQQ
Coenzyme Q10 (CoQ10) and pyrroloquinoline quinone (PQQ) are essential nutrients that important in the health of mitochondria.

Lab studies indicate that CoQ10 minimizes the amount of amyloid beta plaque formation in the brain. PQQ is similar to CoQ10, but it acts after the amyloid beta has accumulated. PQQ helps cells to regenerate after amyloid beta-induced oxidant stress.14

The anti-inflammation diet emphasizes foods that are high in antioxidants, monounsaturated fats, and omega-3 fatty acids, all of which help to reduce inflammation. As important as what to eat, is what not to eat. Sugar should be avoided at all costs as it increases inflammation in the body.

Salmon, flaxseeds, and walnuts (all rich in omega-3s) are the main anti-inflammation diet foods along with antioxidant-rich fruits and vegetables such as berries, broccoli, carrots, and spinach.

Vegetable oils, which are high in omega-6 fats (getting too much omega-6 fat is believed to increase inflammation), and simple carbohydrates are minimized.

Certain spices, such as garlic, turmeric, ginger, and chili peppers, also have powerful anti-inflammation properties and are a major part of the diet.

Other foods that have anti-inflammation and can aid in the fight against Alzheimer’s are:

Caffeine
Studies show that caffeine can reduce brain levels of toxic amyloid beta proteins in animals, while not only slowing but in fact reversing the amyloid beta-associated cognitive impairment.89,94,95 Just 1 to 2 months of caffeine treatment restored memory and lowered brain amyloid beta levels in mice.89

Coffee’s other components, including chlorogenic acid, also have major protective effects on brain cells.90,96-99 It is likely, however, that coffee’s primary benefit to brain health is related largely to its caffeine content.

Coconut Oil
An alternative source of energy for the brain, for people currently suffering from Alzheimer’s.

Rosmarinic acid found in rosemary inhibits the creation of beta-amyloid and it helps to dissolve any beta-amyloid plaques that have already formed. These results were so impressive that the researchers concluded that rosmarinic acid “could be a key molecule for the development of therapeutics for Alzheimer’s disease.”15

besides preventing and reducing amyloid protein build up, rosmarinic acid also helps prevent the breakdown of the neurotransmitter acetylcholine.

Staying both physically and mentally active, taking the right supplements and changing your diet to reduce inflammation are the best tools we have to fight off this terrible disease.

These strategies will buy you time while the research catches up with this devastating disease.