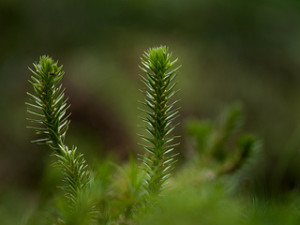 Huperzine-A is a nootropic cognitive enhancer that is extracted the herbs of the Huperziceae family called the Chinese club moss. It is known as an acetylcholinesterase inhibitor, which means that it stops an enzyme from breaking down acetylcholine resulting in an increase in acetylcholine levels. It belongs to the Cholinergic class of molecules, and may be useful in fighting cognitive decline in the elderly. Although the makers of huperzine A start with a plant, their product is the result of a lot of laboratory manipulation. It is a highly purified drug, unlike herbs that typically contain hundreds of chemical ingredients.

Huperzine A  has been found, through multiple studies, to be effective as a medicine for helping people with neurological conditions such as Alzheimer’s disease, but the meta-analysis of those studies concluded that they were poor quality and the findings should be interpreted with caution.[5]

Huperzine has the following qualities:

Huperzine A is thought to be beneficial for problems with memory, loss of mental abilities (dementia), and the muscular disorder myasthenia gravis because it causes an increase in the levels of acetylcholine. Acetylcholine is one of the chemicals that our nerves use to communicate in the brain, muscles, and other areas.

There have been different studies to show the benefits of Huperzine A on acetylcholine levels. Increased Cholinergic activity is associated with greater neuroplasticity which means your brain is better able to adapt, learn and store new information. The Acetylcholine neurotransmitter is also directly connected with intelligence, learning and working memory capacity. Acetylcholine levels typically decline as you age, but a supplement like Huperzine offers an effective way of reversing this decline in the short-term by preventing the breakdown of acetylcholine.

Oral ingestion is the suggested method of dosage for Alzheimer’s patients. These doses will be administered at 50 to 200 mcg of Huperzine A, twice a day. Patients that have senile or presenile dementia are recommended two 30 mcg doses each day. In adolescents, two 100 mcg doses each day by oral ingestion is suggested. If you are buying a supplement that is listed as containing Huperzia Serrata – the source for this alkaloid – make sure to find out the dosage of active Huperzine A rather than the total quantity of plant extract per serving. [3]

Huperzine A is possibly safe and the most common side effects are nausea, vomiting and diarrhea.

Huperzine A should not be taken by the following:

Pregnant or Breastfeeding: There are no significant test results yet in women that are be pregnant or breastfeeding, so it is advised to avoid use of the supplement until more research has been conducted.

Heart Disease: Some people may see a side effect of a slower heart rate. For patients that already have a slow heart rate (bradycardia), it is suggested to use Huperzine A cautiously. There is a slight chance of an increased heart problem, so any heart disease patients are advised to consult a medical professional before using Huperzine A.

Epileptics: There is a slight chance that Huperzine A can worsen epilepsy, due to the fact that it possibly affects chemicals in the brain.

4. Progress in studies of huperzine A, a natural cholinesterase inhibitor from Chinese herbal medicine